Spring is finally here!  No, really!  The center of the sun passed over the equator at around noon today.

So it’s official; it just doesn’t feel like it.  We wish Spring had sprung instead of creeping along at this glacial pace.  Sure, we can depend on the sun but the weather, not so much.

But on a more positive note, the herring are up in the Gilbert Stewart area so it won’t be long before our little striped friends return in waves to capture our full attention.  It’ll be a cold swim, however.  A quick check of the Block Island weather buoy reveals a water temperature of 39° F.  That’s two ticks less than on March 1st when we last looked.

Though it may seem like we’re headed in the wrong direction, there are reasons to cheerful (pt. 3).   Here are a few…

The start of trout season

The return of striped bass

That special trifecta of Patriot’s Day, the Boston Marathon and Tax Day all rolled into one.  What’s not to like about that?

And who can forget The Surfcasters’ April  Awards Banquet  so be sure to get your ticket at today’s meeting or you’ll miss out on a great buffet dinner as only the Spain Restaurant can do it; seeing friends, old and new; presentation of member awards; and a raffle to end all raffles.

And don’t forget to shake some jing out of that piggy bank for your shirt orders at the meeting today as well.

Though Spring is technically still a month away, the recent warm – but oh so soggy – weather is beginning to give up a few signs of that long-awaited season we all look forward to.  Look around you and you’ll see them too.  Spring flowers are poking up through the brown grass, witch hazel is already showing its vibrant yellow blossoms and yesterday was 57° F!  Just warm enough to prompt the wood frogs in the wetlands to start croaking.  Pollywogs won’t be far behind!

While out fishing I’m also seeing a winter holdover striper being taken here and there.  I’ve also been on the lookout for herring in the usual streams to make an appearance, but haven’t seen any yet.  Sure, we’ll get some nasty weather in March – we had two blizzards in the beginning of March last year – but hang in there, Spring is on its way.

And while you’re waiting why not take in the New England Saltwater Fishing Show coming up on March 9th through 11th?

Only two more days until our annual Surf Day  used tackle sale!  So don’t miss out.

All exhibitor tables are sold out and that means bargains by the tableful!  Used gear, new gear, rebuilt gear, rod builders, reel experts, great home made food, and plenty of fun are all on-hand this Saturday at Surf Day.

Doors open at 9 AM, Saturday the 10th and close at 2 PM.  And given the number of vendors this year there’s still bound to be bargains galore well into the afternoon.  Come early or come late, you won’t be disappointed.

And don’t forget our tasty food offerings.  You’ll be hooked!

So come on down to Surf Day where your dollars will surely go far!

Curious about joining?  Talk to any member – they’re the cool guys – and pick up an application form.

Can’t make it?  Watch for our Narragansett Surfcasters feed on Facebook for an on-the-scene view of the action.

Can’t decide what to do on Saturday, February 10th? 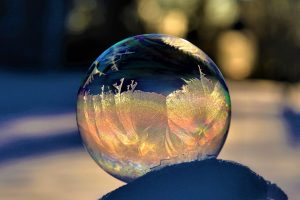 Why not go to the

Saturday, February 10th, from 9 AM until 2 PM
Here you’ll find local plug builders, rod builders, a
reel repair expert, antique plug display, tons of tackle, plenty of good food “cheap”!
It’s a great place to “up your gear” at a fraction of
the cost.  Always Great Deals!  What better way to spend a cold Saturday in February than with tons of fishing gear, guys talking striper fishing, and tasty home-cooked food!
Come on down and get some great deals on tackle.
You will not be disappointed!

Andy Lamar was a charter member of the Narragansett Surfcasters and I had the pleasure of knowing and fishing with Andy, a renown Rhode Island surf rat who passed away a few years ago.  Anyway, this story goes back many years ago (possibly 1991 or 1992) when Andy and I went to Block Island for a weekend around the middle of October.  We arrived in the afternoon and began fishing at dusk on the last part of the outgoing tide at Cow Cove. We were to meet a fellow worker of Andyʼs at the 8:00 PM ferry and Andy left to meet him, sadly I do not remember his name but he was a young and inexperienced fellow who brought a freshwater spinning rod and no other equipment.

Andy came back and picked me up and we went to where we were staying.  I had an extra pair of waders and rod that I let this fellow use and we went out later that night on the building tide at Grace’s.  We were fishing eels and it was a night to remember.  I caught 4 fish from 18 to 25 pounds on 7 casts, plus a few more in the low 20s as the night wore on; the fish were in tight to the shore that night.  The younger guy caught a few fish in the teens but Andy struck out even though he had probably fished this spot a hundred times since the 1980s.

We were set to leave the following afternoon and after a few hours of sleep decided to go back to the same spot at about 10:00 AM on the next incoming tide.  Andy, as usual, a stoic figure with a Lucky Strike butt on the side of his mouth was slinging eels on his old 10 foot Lami and Ambassadeur 7000.  It was getting to the point where none of us were catching anything and had to make the ferry when Andy had a hit and landed a 33 pounder that took the trophy that year in the Narragansett Pier Saltwater Fishing Association’s yearly tournament for the largest striper taken on Block Island by a member of the club.

I often think of Andy and all the tricks he taught me over the years, he had many great stories that I wish he had written about. I ended up with his 10 foot Lamiglas after he passed and try to use it whenever I can.

As it happens from time to time, our area was visited by schools of very large bluefish in the fall of 2016.  These gators are not only fun to catch as they explode on your lure and will chase down almost anything you throw at them, but will give you a real tussle when bringing them in.  One morning during this run, I arrived at the beach before sunrise and parked next to the only other vehicle in the lot, a beautiful, shiny Silverado.  Leaning on his open tailgate was a fisherman just pulling on his waders.  I said hi and did the same on my tailgate, but having the more basic equipment, I hit the surf first.  I waded out a good way, fished for a while, and as the sun rose, I spotted the splash of pencil popper off to my left.  Looking back over my shoulder, I saw the gentleman from the parking lot knee deep in the surf, not as far out as I was.

I hooked several of those monster blues.  Each time I walked them back to shore, I got an acknowledgment from my new “friend”.  Some time later – now with the sun being well up – and the bite subsiding, I returned to the beach and chatted with my fellow surf caster as he rested by the seawall.  We introduced ourselves, swapped a few stories, and walked back to our trucks, having spent a good morning in the surf.

Just before I left, Dick Mandeville came around my side of the truck and handed me the most beautifully crafted top-water lure I had ever seen.  He said he enjoyed watching me catch those big blues and said he wanted me to try one of his lures.

We stayed in touch since that day in October, even when Dick was hospitalized with a serious bacterial infection this past year.  He even bought a new, longer Airwave Elite rod to cast farther to hit those bluefish I was locked into that day.

After a lengthy recuperation, Dick recovered from his illness enough to attend our annual club Christmas banquet.  And I’ll never forget the sight of him walking up to the raffle table with a handful of his amazing plugs to drop off for the raffle.  No one asked him to do so – that was characteristically FishDoc.  He was always willing to give, to donate to a cause, to be just one of the guys.  But behind the scenes he worked tirelessly procuring the finest wood, turning it on his lathe, spraying and blending the paint, through-wiring the hardware, attaching triple split rings, and the best hooks to his unique and marvelous plugs.

Dick Mandeville lost his brave battle against that pernicious bug and left us on January 17th, 2018.

To those of us fortunate enough to still have his lures or have caught fish with them, he lives on and will be fondly remembered whenever one is clipped to our line.

Saltwater fishing license, that is.

What a wonderful time of the year this is when we all seem to be enjoying ourselves – and each other – more, despite the usual rush of getting things done, oftentimes at the very last minute.  We see Christmas trees and homes decorated in merry fashion, lighted wreaths, store windows bedecked with ornaments,

and even the occasional Santa. 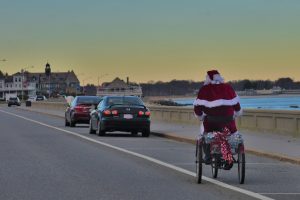 So take a moment to wish others a heartfelt Merry Christmas and a Happy New Year  when you see them because this special season is all too fleeting.

I would also like to take a moment to reflect back on this past fishing season in Rhode Island, where the beauty and bounty of nature have come together to provide us all so much enjoyment.  I cherish the sunrises and sunsets we’ve shared, the storms we’ve braved, the friendships we’ve made, and look forward to doing it all over again next year.  And I’m beginning to understand why the stripers migrate south: it’s not so much to spawn as it is to get away from us crazed fishermen!

So again, let’s all enjoy the season and each other.  Be safe, and fish hard.

With the fishing season winding down and the holidays quickly approaching, we have an opportunity to reflect back on our good fortune and be thankful for what we have so generously been given.  In particular, I am grateful for all the members of the Narragansett Surfcasters who so willingly contribute to the betterment of the Club and collectively make this Club so very special.

Happy Thanksgiving to all our members and their families and friends.

Yes, you guessed it – the new Narragansett Surfcasters website is alive!

Though I’m still working out some wind knots, most of the site’s functionality is working as desired.  So if you have a link or favorite set to the old website, go ahead and use it, it should bring you to our spiffy new one.  Let me know what you think, good or bad.  This is OUR site, not mine, so let me hear it.

I’ve also created a public Facebook Page for anything you want to publicly post and a private Facebook Group that is just ours.  So give them a look-see.  Search Facebook for “Narragansett Surfcasters” and you’ll find the Page; search under Groups for the exclusive Group.  When you find the Group, click JOIN and I’ll approve your request as long as you’re a member of the club.  Approval may take a day or two if the fish are jumping!

That’s it for now!  Your feedback is welcomed.